An Experiment To Reduce Cracked Eggs

Tuesday, May 17, 2011
All our ducks are in buildings that are 40' wide. Along one side we have a 5' wide concrete pit that has a wire floor over it. Nipple waterers run the length of the building, centered above this pit. Most of the nests are on the opposite side of the building so they stay as dry as possible. As you know, ducks always congregate near their water to not only drink but play and bathe in the water. One problem with the wire floor is that any eggs laid on the wire floor have a much higher chance of getting cracked.

It was brought to my attention that some flocks were laying many of their eggs on the wire - resulting in dirtier eggs and more cracked eggs. So for several days we recorded how many eggs were laid on the wire and how many cracked eggs there were for each breed. On average, 15.3% of the eggs were laid on the wire (more than I expected!) and 2.8% were cracked or broken. This was too high, too! So we decided to run an experiment. We chose our flock of White Layers as the test flock as it is fairly large and it was above average in wire eggs (34.5%) and cracks (3.4%). 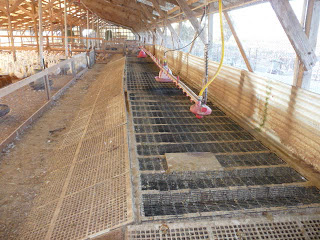 We put a fence along the wire pit (the fence on the left in the picture) and put in two gates, one at each end. For ten days I went out each evening before their lights went out (about 8:30pm), moved the ducks off the wire platform and closed the gates. This prevented the ducks from going on the wire floor from 8:30pm until 7:00am the next morning. In the morning the gates were opened and eggs collected. Some eggs were laid along the fence but the vast majority were laid in the nest boxes where they should have been all along. A few ducks would not have laid when the gates were opened at 7:00am and would deposit their eggs on the wire when they were drinking, but it was less than 1% of the eggs. None of this surprised us.

The experiment, however, was to learn how soon they reverted to laying on the wire again after I stopped closing the gates in the evening. You see, I had no desire to spending 45 minutes each evening walking through duck pens herding ducks and closing gates. So after 10 days of keeping them off the wire during peak egg laying times (3:30-6:30am), I stopped closing the gates at night. They could go on the wire, drink anytime and lay their eggs anywhere. 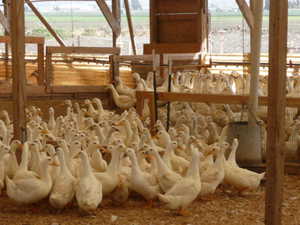 Before we started our experiment, they were laying 160 eggs on the wire. Now that they are "trained" we are only getting 45-55 eggs on the wire (10.8% of eggs laid). Prior to the experiment we were getting 3.4% cracked eggs from our White Layers. During the period they had no access to the wire at night we had 2.8% cracked but now we are down to 1.8% cracked! I have no idea why it is less now than during the 10 day "training" period but the key is we are getting fewer cracked eggs than before.

So what is the moral of the story? You can often train your birds to do things that are better for you, better for them or better utilizes your resources. We are going to move the fence to some other flocks that are laying too many eggs on the wire and see if we can train them to lay in their nest boxes, too. I hope so!

How have you trained your ducks to make your job easier, increase their productivity or improve their environment?