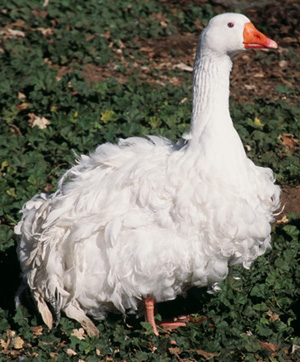 You may order no more than 6 of this breed, including 3 Females.
Free Shipping on All Orders!

Sebastopol are probably our most unique appearing goose. You would think that a bird such as this would have been bred fairly recently but actually they have been around for hundreds of years. Their origin is thought to be from the countries surrounding the Black Sea, Hungary and the Balkans. They were known early on in England as Danubian and the Spanish and Italians referred to the breed as Danubio due to importations from the lower Danube river area. How they got the name Sebastopol is a mystery other than some of the first birds may have been imported from the port of Sebastopol.

Click Here For All Breeds Available Now
There are none available right now.

The correct colored Sebastopol is pure white. Young birds may start with a few gray feathers but gradually lose them until they are pure white at about 20 weeks, after their final set of feathers develops. Sebastopol can stay lovely year around if you provide a mud free environment with at least a bucket of water for washing. As their feathers do not lay flat, their feathers do not insulate them as well as other breeds. Wind easily fluffs their feathers and any heat held by the feather is quickly lost. So in very cold weather they will spend more time inside than other breeds.

Fertility seems to be a problem with most Sebastopols, along with lower than normal egg production. Fertility is adequate early in the season (and they do seem to come into production earlier than most breeds) but quickly drops off. Often times we will have no fertile eggs the last three weeks of production in the spring. In 2005 and 2014 we tried artificial insemination with our Sebastopol but with discouraging results. Artificial Insemination is used frequently in Europe, and even with consultation with those doing it in Europe, we produced zero fertile eggs with artificial insemination. So now we are back to relying 100% on natural mating.


I ordered 5 Sebastopol goslings and was VERY happy with this company! All geese arrived alive & happy, they delivery time was very quick, I was updated throughout the shipping process. All of my geese are doing wonderful! Will be ordering from Metzer Farms again in the future. Thank you!


My boys arrived happy and healthy! They are now 11 months old and are such a joy! We love them! Metzer was amazing to deal with! Will order again!