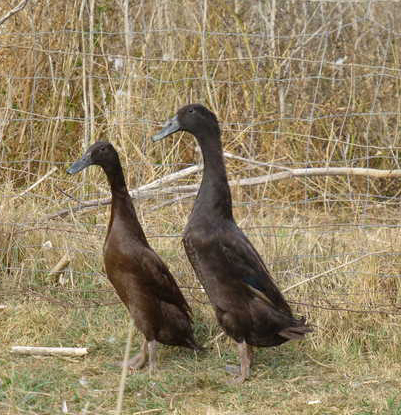 All Runners were originally bred in Southeast Asia for high egg production and excellent mobility. There is evidence of their ancient ancestry from stone carvings in Java that are over 2000 years old. These ducks are still being used as they were then. Flocks of ducks are herded daily from field to field eating waste rice, weed seeds, insects, slugs and other bugs. They are then put in a bamboo pen at night where they lay their eggs and are released the following morning to clean other fields. During the course of their lives the ducks may cover hundreds of miles in their travels. Therefore, a hardy mobile duck is absolutely necessary - you will not find a better foraging duck than the Runner.


As they are light in weight, there is also less chance of them trampling the vegetation in your garden or yard. Because of the high egg production of the native ducks, there are many duck eggs used in Southeast Asia. Not only do they replace the typical chicken egg but duck eggs are made into two unique products, the balut (a partially incubated duck egg) and the salted egg (fresh eggs put in a salt solution or salt mud until the salt has permeated the entire egg). Due to the emphasis in coloration over the past 80 years in the breeding programs in England and the United States, the Runners no longer excel at egg production. They are very average at this point.

Why are they called Indian Runners? Tradition has it the ducks were first imported into England in the 1850's and were named Indians as the ship had proceeded from India and had traded with the "Indies". It wasn't until 1909 that the importing family acknowledged that they came from Southeast Asia - not India. But by then the name had stuck and the breed was extremely popular throughout the country. Until the Khaki Campbell was bred, Runners were by far the most productive egg laying ducks. Prior to the turn of the century there were many egg trials in England where representatives of different breeds and farmers were put on a common site and their egg production monitored and compared.

The first Runners imported into England were either Fawn, Fawn-and-White, or White in color. The first records of them being in an exhibition were in 1877 at the Dumfries Show in Scotland. In 1898 they were admitted into the American Standard Registry. The Black, Blue and Chocolate were not admitted until 1977. Though the Black and Chocolate breed true, the Blue do not as only 50% of their progeny are Blue. So that we produce 100% Blue colored birds, we have two pens of breeders. One pen has Black Runner males on Silver females. The other pen has Silver males on Black females. For more information on producing the blue color in poultry and our breeding program, see our page on Blue Swedish Ducks .


Our chocolate runners are perfect and lay beautiful teal eggs! What a nice surprise!


I ordered a male and female chocolate runners. When the order arrived, two days after shipping, I found an additional blue runner. She is a welcomed addition to our already existing flock of two white and fawn runners. Being in Florida with very warm weather, we took them outside for some supervised time to learn to be ducks. The little male chocolate runner, for some unknow reason stopped walking. There was no incident to have caused and injury. We were perplexed. I called customer service and was lucky to speak with someone who was able to provide me with information to get little Daffy walking again. She suggested possible nutritional imbalance. We verified the 20% protein in the Purina Flock Raiser was good. But she also informed me, niacin deficiency could cause Daffy to stop walking and that it was probably too soon to have the ducklings out of the brooder. We immediately returned the ducklings to the brooder, under the heat lamp after the call and lo and behold, Daffy is walking just fine. The two female ducklings are strong and don't seem to have any issues but I have ordered some brewers yeast to add to their feed to provide the additional B3 support that Daffy seems to need. Thank you Metzer Customer Service for providing valuable information to get Daffy, Desi and Dottie off to a good start. Soon they will be big and strong enough to join Dixie and Daisy outside.


I love these little ducks! They lay, lay, lay. AND - I know that runner ducks aren't supposed to be particularly maternal, but they immediately began trying to sit on the eggs after they laid them. Next year, I'll see if they're able to hatch any! Definitely, not pet material - because they're very skittish. I put them on bug patrol, and they're very proficient at it! I'm going to get some more in the fall.


I ORDERED CHOCOLATE INDIAN RUNNERS AND THEY CAME ON TIME, FREE SHIPPING, GREAT PACKAGING, ALL ALIVE AND VERY ACTIVE ALREADY. THEY ARE BEAUTIFUL DUCKS JUST WHAT I WANTED! MUCH BETTER THEN OTHER HATCHERIES. IF I NEED TO ORDER AGAIN IT WILL DEFINITELY BE WITH YOU AND IVE ALREADY BEEN TELLING EVERYONE TO ORDER THROUGH YOUR FARM. GREAT PRICES AND SHIPPING IS FREE! THANK YOU FOR A GREAT JOB AND THINKING OF CUSTOMERS WHEN IT COMES TO COST AND THE AMOUNT OF DUCKS YOU CAN ORDER AND ADORABLE DUCKLINGS!


Over the moon with my four chocolate runner ducks, absolutely gorgeous, showed up healthy & happy, male was labeled with a rubber band ( much better than plastic), & I most definitely will be ordering from this hatchery in the future. Could not be happier with my purchase!!!! My females have just started laying and they all have grown into absolutely gorgeous ducks!


Ordered 15 ducks. 6 white layers, 4 Cayuga, 3 Golden, 2 Chocolate runners. All arrived healthy and happy, I was shocked. I didn't think all 15 would survive shipping and their new life in Michigan but they did. They are all doing great 6 months later. They arrived late April. Kept them in the pole barn with a heat lamp for the first month. Slowly introduced them to my existing 5 ducks - 1 KC drake, 2 Swedish ladies, and 2 Runner mixes. Can't believe how big they all are compared to my other 5. All of them started laying at 5 months old except the 2 cayuga ladies. One of the Cayuga ladies is definitely wanting to be a mom. Camera in the coop shows her gathering the eggs the other ladies lay and sitting on them. I say the Cayugas haven't layed yet - but I just haven't seen any darker eggs yet like they say Cayugas lay at first. The Chocolate Runners are tiny at 6 months old compared to the others, and I suspect they are the ones laying tiny little eggs, about 1/4 the size of the others. Anyway, all the ducks ordered from Metzer arrived healthy, and are doing great 6 months later!!!