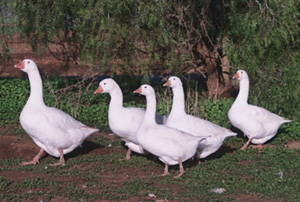 Because of their fast growth rate, large size and white feathers, Embden are the most common goose used for commercial meat production. Their feet and beak are orange but their eyes are a distinct blue. Due to their large size and breeding, they are a strong breed. At hatching time you can be quite accurate in sexing the day olds from their coloration as the gray down in the males is lighter than in the females. As adults, however, both sexes are pure white and the only way you can determine the sex is the males are normally larger, more pompous and proud in their carriage and shriller in their voices (as with other goose breeds).

Click Here For All Breeds Available Now
There are none available right now.

Originally bred in Germany to be tall, rangy, large geese, the Embden was refined a bit more in England to be a more compact shaped goose. Either way, Embden are the largest geese, along with the Large Dewlap Toulouse. In our experience they also produce the largest eggs for those interested in decorating eggs. The first Embden geese were imported in America in 1820 and initially called "Bremens" after their port of departure. Their owner, James Sisso, reported these geese "lay in February and set and hatch with more certainty than the common barnyard goose, will weigh nearly, and in some case, quite twice the weight, have double the quantity of feathers, never fly, and are all of a beautiful snowy whiteness."

The Embden geese are very common-and for good reason. They are large, hardy, lay good quantities of eggs, will often raise a nest full of goslings and are very pretty in their all-white appearance.


Your goose was the biggest and fastest grower we ever had. Too bad a fox thought so too. Bold young fox that my son actually caught and beat up, but still ran off. Now a Eagle got another. We are in the wilds of the Sierra's and the predator pressure on the edge of wilderness is rather problematic. Building better pens an keeping the German Shepherd out all night. Miss my goose, a great friendly personality.


We received our girls the 4th of April believe. They arrived health and happy. Also they imprinted on me right away. I took them for walks around the farm. They are 2 months old and are very calm and loving geese. Very inquisitive and look after the 6 ducks they came with. I will definitely order more of these geese.


I bought 2 males, kept 1 to raise with some new chick's to be a flock guardian. The other I gave to my sister for the exact same reason. They are about 6 weeks old and now I want to just raise geese. These guys stand about 2' tall now and are still chirping like goosings. My guy "Ricky" has been more like a puppy than a bird, even at 2 weeks old he would follow me all over the property until he just pooped out. Now he's spoiled and acts like a lap dog after his morning bath. I do let him eat weeds in the garden he's definitely a good help as well as a silly pet.


These are lovely, fast growing birds. I ordered 3 along with some muscovies, and all arrived healthy and extremely active. They grow quickly, and due to their grazing eat a lot less feed than the muscovies. The male is noticeably larger than the two females at this point, and at this point outweighs my buff American geese, who are a few weeks older. They're curious, friendly birds, and I'm very happy with them.