Sexing Your Ducklings and Goslings

Normally we ship the birds straight run which means you get them as they hatch - which in larger numbers is about 50% males and 50% females. But we also can sex all of our ducklings and all of our goslings. We do not sex our chicks, guineas, or pheasants. You tell us the sexes you want and we will mark those birds with colored rubber bands.

As these are rubber bands, they are extremely easy to remove. Just grab the band and pull it down over the foot. 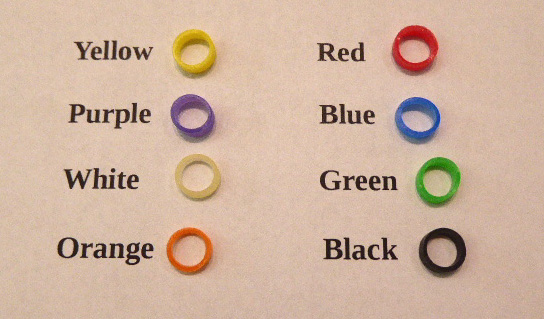 You want to sex a baby Duckling or Gosling?
This cannot be easily explained. It can only be learned if someone is showing you the steps. We have been told it is similar to sexing rabbits. You must expose the cloaca. If a penis pops out, it is a male. If nothing pops out you have a female (or a male that has been done incorrectly). In the hands of an experienced sexer, this rarely causes any harm to the bird.

Sexing Adult Ducks
This is fairly easy. After about eight weeks, the males have a deep, raspy voice. The females have the typical, loud QUACK. In addition, the males develop a curly feather on their tail. If you see a curly feather, it is a male. If there is no feather, it is either a female or a male that lost his curly feather. Males also have larger heads and thicker necks. Males of the Rouen, Mallard and Welsh Harlequin breeds also develop the green head and colorful wings by about 15 weeks of age. Until that age they all look like females. In addition, the bill of Rouen and Mallard drakes is dull green by six weeks of age, females' bills are normally dark brown and orange. The final way to determine the sex is that if you see them lay an egg... it is a female.

Sexing Adult Geese
Sexing adult geese is more difficult as there are no definitive, obvious differences between males and females. Males are typically larger and have more shrill voices. They also seem to walk around appearing a bit more cocky with their chest stuck out, especially when challenged. Males are typically larger with thicker necks and bigger heads. And during the breeding season they are more protective of their female mates by standing with their neck extended between the intruder and their mate. By about January of the year following their hatch, you can often vent sex the adults. It is difficult to do before this time as the penis is very small before sexual maturity. But once it matures, it goes from the size of a pencil lead to a spiral corkscrew of a pencil's diameter and is barbed. The difficulty is in opening the vent sufficiently in an adult to make the penis pop out. Their sphincter muscles are pretty strong. Turn the bird over and use your forefinger and thumb to pull open and press the vent. You just have to practice until you can do it. But only try for about 45 seconds on a bird until you go to the next. They learn to clamp down and you will never be able to expose the penis after about 45 seconds of trying. Try that bird again tomorrow.