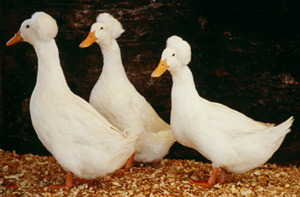 The White Crested is also a classic breed, having records of its presence as early as 1660 due them being in paintings of Jan Steen. Other Dutch painters such as d'Hondecoeter, Dirk Wyntrack (1670), Peter Casteels III (1723) and Aart Schouman (at the end of the eighteenth century) also show Crested ducks. Interestingly the Crested duck was admitted into the American Registry (1874) before the British Registry (by 1910). Though they can make a good utility bird (eggs and meat) their popularity waned and it wasn't until the 1980s that their popularity rose again.


The only crested breeders we have are White but we will occasionally have crested Blue Swedish, Rouen or Buff hatch. Any breed with a crest can be shown in the Crested class. The ideal crest is large, yet centrally located on the head. It is also not to be split into two lobes. According to several books, 25% of fertile eggs produced from Crested parents will die prematurely and 33% are supposed to hatch without crests. We do not seem to find this. In addition, over 90% of our White Crested ducklings have good sized crests. We do not sell a White Crested duckling unless it has a crest.


We had never purchased live birds before but were set on this breed and no where and our area offered them. Our two sweet girls came healthy, though a little tired, and are settling in nicely.


Metzer Farms is awesome! Our 3 White Crested ducklings were born on 1/10/22 in California and we had them at our house in Fuquay-Varina, NC the morning of 1/12/22. They arrived healthy at our post office. They are going to make awesome additions to our flock.


We've had Crested ducks in the past and loved their personality so I ordered more. I love them. Mine was slower growing at first but now is larger than all the others. I would suggest getting the expedited shipping on these as they don't do as well in the cold.