Flight Training for Ducks and Geese

Friday, September 21, 2018
One of the most common question we get from customers is if their ducks are going to fly off when they are older. No, they will not. Except for the Mallard, none of our ducks inherently know how to fly. They especially will not fly off if they associate you and the area as a place of safety and food.

However, your ducks can be taught to fly. 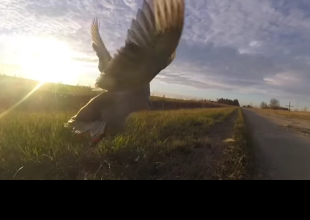 Meet brothers Joel and Jacob. Back in 2016 they taught their 8-week-old goslings and a handful of ducklings how to fly with amazing success. Here is their fascinating story.

At first, when they were ducklings, we didn't ever expect anyone but the mallards to fly. The mallards kind of taught themselves, when we would go on a walk, they would stop until the rest of the ducks were some distance away and then fly to them. Now they circle the yard for long periods!

The domestic ducks: 3 Khaki Campbells, 3 Fawn and White Runners, and 3 Buff Orpingtons needed a little more help to fly, but not much. We started by walking one or two ducks a distance from the flock, always going so that they could fly into a headwind. At first when they started flying, they couldn't take off by themselves, so we would toss them into the wind. This should ONLY be done if you have a very strong wind (20 mph or more). That way flight is much easier and the landing is soft even for a heavy weak-winged duck. When we tossed them, at first they would simply land, but they eventually learned to fly to the flock. Over time, they needed less and less wind, until they could do it without any headwind at all. Then one day instead of tossing them into the wind, we simply walked some distance from the flock, then turned around and ran back to the flock. The duck(s) hesitated, and some didn't get it a first, but most would start running and fly back!

Now when we take them on walks, sometimes they get excited and will fly to the destination, or after they have eaten all they want, they fly back to the barn for a drink! They definitely love to fly, and get very excited both before and after they fly. All of the ducks but two (the two Buff Orpington hens) have flown. Right now only the drakes are flying, except for a Khaki Campbell hen who loves flying even though she lays. The most impressive flight ever by one of the ducks was when on a kind of windy day, the Khaki Campbell hen Mildred took off on the opposite side our property from the barn, flew really high above our trees, and because of the wind she wasn't able to land, so she circled 2 times 50 feet in the air, then glided down like a mallard! I had never dreamed a domestic duck could fly like that, but she can!
Training the geese was a bit different. For the geese we also took them a little ways from the flock and ran into the wind, but we never tossed them up. We simply started running, and when we run, they get extremely excited, honk, and then run after us, quickly overtaking us to fly to the flock. We started training them at 10 weeks, and they are now 8 months old [at time of writing]. It took about 4 weeks of daily training until they could both fly, and like the ducks at first they needed a strong headwind, and by strong I mean about 35mph. I think they could have flown quicker than that, but they had gotten used to simply running along the ground, instead of flying.

Many times they would go 6 inches into the air, then get scared and come to a halt. But then first the female goose, Elizabeth suddenly rose up one day, flew about 200 feet, and landed perfectly! After that she took off every time, she had conquered her fear. James the gander started flying about 2 weeks after Elizabeth, and he was very very proud when he finally did. Now they are so much stronger and don't need any wind at all to get lift, James has flown a little over a fourth of a mile, and Elizabeth has flown at least a half mile. James is not quite as daring as she is, he hasn't ever gone any higher than 20 feet or so from the ground, but she likes to go as high as she can in a flight. Elizabeth can take off with a single leap and flap, and rise to 60 feet in the air, then float down gracefully to the ground. The geese definitely LOVE flying, if we don't take them out for a flight every day, they follow us and honk until we do! We don't give them any reward after flying, just a lot of praise. They also praise themselves quite a bit when they land, they stick their wings out, honk joyfully, flap, and then preen.


It's hard to know what ducks and geese other than the breeds we own could fly. I don't think a Pekin could fly, but you never know. I didn't believe our Buff Orpington drake would ever fly, he just seemed too heavy, but after months of training my brother taught him how, and now he flies everyday and loves it. Runners definitely can, and quite easily once they realize they can't fly in a vertical position, but have to flatten out. I think that most Rouens, Welsh Harlequins, Swedish, Cayugas and Anconas could. I'm referring to the normal farm birds, not show quality. For geese it's harder to know, but I am quite sure by talking with others that production Toulouse, Romans, Pilgrims, Buff, and Embdens can fly if they are not too overweight. Super Africans, Dewlap Toulouse, and Sebastapols really would shock me, I don't see any way they would. If a Sebastapol had normal wing feathers, it could a little bit. Training ducks and geese to fly is definitely rewarding for both the trainer and the waterfowl. It's amazing to watch them fly, and it keeps them healthy, safer from predators, and they love it!