Thursday, March 8, 2012
The following is a guest blog from Cheryl Walter with her recommendations on raising geese with children. Thank you Cheryl! If anyone else would like to contribute a blog, please email John Metzer.

Goslings are super cute, and so satisfying to hold! But before you get a goose, you should do a lot of considering to be sure that the goose you want is the right animal for your family. Unfortunately, every fall unwanted domestic juvenile geese appear at local ponds because the people did not fully consider the needs of the geese or their families before they made the purchase.

We have Super African geese that we bought from Metzer Farms a year and a half ago after a period of consideration. We have a flock of Indian Runner ducks, and we wanted to have an extra layer of protection for the ducks, as well as an animal that would help us to keep the grass down.

We have three children, who were ages 10, 8 and 5 when we got our first geese. Before we bought our geese, we knew full well that these particular geese would be aggressive, particularly to kids who showed that they were scared. We considered existing fencing that allows children and geese to have space. We looked at where we would house our geese. We also got a livestock guard dog to help keep coyotes away from the geese. We considered the noise and our neighbors. (As many of the neighbors have roosters that crow at 3:00 am, this was not a large factor. Had we been in town, or a subdivision, it would have been different.)

When we got the goslings, we handled them as much as possible. They loved hanging out with the kids, even listening to my daughter play her flute. 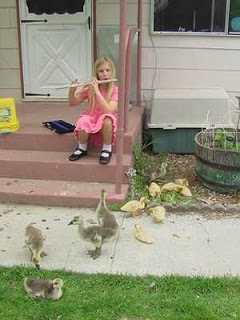 They all came over to listen to the flute!

However, as they got bigger, the males became more aggressive to my sons, who had backed away, scared that they would get pecked. Once the geese figured this out, every time the boys came into the goose area, the ganders chased the boys. But this is not true of every kid - we had a 4 year old here a couple weeks ago who was running straight at the flock and showed them who was boss – and the ganders ran away! So it really depends on the child. If they are timid, parents would be wise to wait until the child is older. One of the ganders imprinted on me – he follows me around like a puppy, and eats grass out of my hand.

All of that changed during mating season. Ganders became very pecky (true to their breed) and even my imprinted gander pecked me in the face. I would not let the kids pick up the ganders any more during the spring and summer. 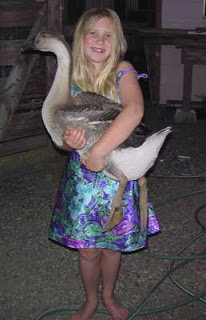 Stripey, our adult male, in the fall.

I would recommend anyone who wants a pet goose, to get only females. (Metzer Farms sells sexed geese – take advantage of this!) Our females are not aggressive, even when setting on eggs for the first time, as they let us handle them. In fact, one refused for 3 days to get off the nest to eat so I had to take her off daily after that for food and water. The gals were very nice, even when the babies hatched, letting my kids reach under and pull out the peeping goslings to pet them. The ganders, however, if anything, became even more protective and aggressive after the goslings hatched. This may vary from bird to bird and from breed to breed, so look into the breed you want, and get the ones best suited for your situation. 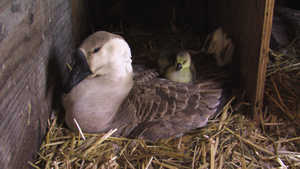 Sally and her gosling Olive.

My children did show ducks at the fair last year, and this coming year my oldest wants to show a goose. We have agreed that it must be female, as they are more laid back in nature, and from what we saw with other geese at the fair, are less stressed. All the kids in 4-H at our fair are encouraged to take their animals out and let fairgoers pet them, so a sociable animal is a must. My daughter picks up the geese daily, and as we get closer to fair, the goose will come into the house to sit on her lap while she watches TV, which to some extent, simulates the sounds of many people at the fair.

Unfortunately, we have known people who impulse bought their geese. They were at the feed store to get some chickens, and just couldn’t resist those cute, meaty, fluffy goslings that are so satisfying to hold. But they did not consider how the animal would fit into their lives. One family lives in a subdivision, and their Brown Chinese goose raised a racket. They did not realize the amount of elimination that a goose does a day, much more than their tiny dog! The goose ended up being a gander, and while it got along ok with the kids, it was frustrated when mating season came. The gander ended up at a local farm. Another nighbor family bought a brown Chinese. It ended up chasing their then two and four year old children. It ended up moving – to our house, where it doesn’t get along with the Super African geese, but does hang out with and look over the ducks. Each fall when we go to the park near the river, we see “new” domestic geese, which makes our whole family sad as they are always quiet tame. 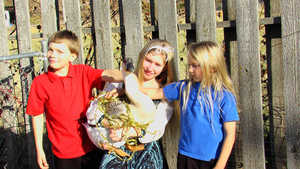 People who want a goose, or a whole flock of geese as pets, should research the breeds of geese and pick the ones best suited for their needs, the ages of family members and the neighborhood. Geese can be very sociable and nice, but some breeds are more aggressive to strangers or during mating season than others. Despite a few pecks from our geese, the whole family loves them. They have wonderful personalities, are certainly unique, and a lot of fun to have around.