Introducing Your New Ducks and Geese into Your Existing Flock 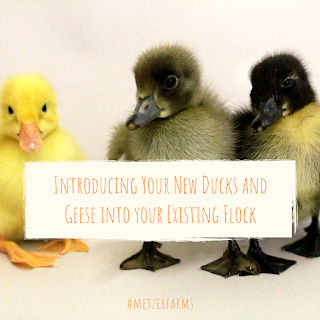 When getting new ducks or geese to add to your flock, always take into consideration the introduction process. Waterfowl have their own pecking order just like chickens do, though typically not as violent. There will be ruffled feathers and possibly some blood, but death is highly unlikely.

Do not introduce day-old birds to 1-week old birds right away. Keep them separated for several days until the younger ones are a bit stronger and know where the food, water, and heat are located.

If the older birds are 2-weeks old or older, then there can be a problem. We suggest waiting until the younger birds are at least 8-weeks old before introducing them to the rest of the flock.

When it is time for the introductory process, there are many ways to start. Ideally, you would want the younger and older birds side by side in separate pens for about a week. This way they get used to each other’s presence. After about a week, make an opening connecting the two pens. If you do not have a way to so this, let the younger birds have the “home field advantage” by moving the older birds in with them.
Observe them frequently for the first 24 hours. If there is any bullying on the elders’ part, then separate them, but keep a way for them to see each other. You do not want them to be able to physically interact, but at least see the others.

If you are forced to separate them, try again in about a week. You will need to continuously repeat this process until they are able to tolerate each other. They do not have to be the best of friends, but if they are at least not trying to kill each other or constantly picking on the younger birds, then consider it a success.

Keep in mind that acceptance is not always instant and may not happen for a while. You can have two flocks in the same pen for several months or a year before they finally integrate with each other.