Male vs Female: How to Identify Adult Ducks 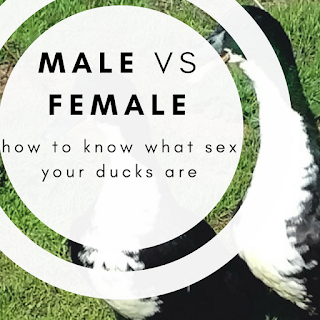 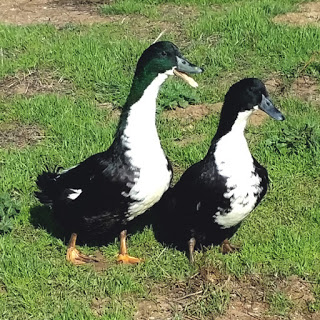 Tail
A male duck of all common breeds (except the Muscovy) grows a distinctly curled feather in its tail. The lack of a curly feather, however, does not indicate a female as it could have been pulled or molted. However, a curly feather does indicate a male. The curly feather appears within about eight weeks.

Voice
Sadly, the cute chirp of a duckling starts to change within several weeks. By eight to ten weeks males have a deep, raspy voice while females maintain the loud QUACK. For practice you can listen to our video of male and female duck’s voices.

Coloring
There are breeds of ducks that are sex-linked in their coloring. The best examples are the Mallard and Rouen breeds. Both males and females start as a black and yellow ducklings and turn brown once they get their first feathers. But when they start to get another set of feathers at about 12 weeks, the males begin to get their green heads, cinnamon chest and silver belly. For some other breeds like the Buff, Fawn and White Runner, Khaki Campbell, Welsh Harlequin and Silver Appleyard, the males will have a different coloration in their head and/or body feathers, though not as striking as the Mallard and Rouen.

Some breeds have a different colored bill for males and females. This is true of the Khaki Campbell and Welsh Harlequin where the males have lighter colored bill than the females.

If All Else Fails
If you still cannot determine the sex by the size, tail, voice, or coloring, there is vent sexing. We will be covering this in a future post, so stay tuned.