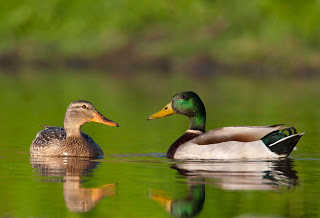 The most popular and well-known duck is probably the Mallard. They can be found just about anywhere in the world. Mallards are so common that when most think of a duck, they imagine a Mallard.

The Mallard is the origin of all domestic duck breeds other than the Muscovy. According to Charles Darwin, of all wild ducks, only the male Mallard has the distinctive curl in the tail feathers. As all male domestic ducks have these curly feathers, he came to the conclusion that all domestic breeds originated from the Mallard. From the big, meaty Pekin to the skinny, upright Runner duck - their ancestor is the Mallard breed.

They are a very popular hunting bird as they are so abundant throughout the US. Their meat is considered very flavorful.

They can lay between 60 to 120 eggs a year on a farm. In the wild they will lay 10-15 eggs in a nest. If their first brood is raised early or their nest is destroyed, they can lay a second set of eggs. Compared to domestic breeds their egg production is low, but their fertility is one of the best we have - about 90%. 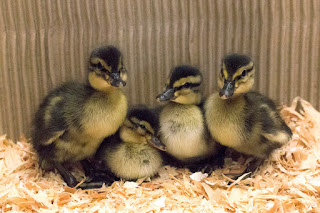 Mallards are beautiful birds. Females are a speckled brown, but the males sport striking green heads, a white collar around the neck, gray on the belly, and cinnamon chests when they are adults. However, until males start to get their colorful feathers at 12 weeks of age, they are the same coloring as the females. By 16 weeks the males are fully feathered and retain these colors until the end of the breeding season when they molt into more drab, less brightly colored feathers. After 3-4 months, their beautiful feathers grow back and these are retained until their molt the next summer.

Today, the Mallard is considered an invasive wild species in some areas as it is able to mate with other indigenous ducks thereby producing new hybrids and eventually diluting the pure native breed until purebreds are rare. Wildlife authorities in both Hawaii and Florida do not allow the importation of Mallards in fear of them hybridizing their native duck population. In Hawaii, the native duck is the Koloa duck which is on the endangered list, and in Florida it is the Mottled duck.

The vast majority of wild Mallards migrate. In the summer they can be found in the northern parts of the US and all of Canada. When fall arrives and food becomes scarce, they fly south to more temperate climates such as the southern US and parts of Mexico. Come spring, they again return to their nesting grounds.

This migration pattern can be divided in to four different flyways or flight paths: Pacific, Central, Mississippi, and Atlantic Flyways. Scientists believe they use a combination of polarized light, stars, and landmarks to find their way during migration. Nature’s own GPS!

There are, of course, exceptions. There are plenty of areas that do not have a winter - where the water does not freeze over and there are enough food resources year round. In these areas many Mallards decide to take up year round residence. This includes Hawaii’s Koloa and Florida’s Mottled ducks which are both categorized as non-migratory.

If you release Mallards that have not been hatched and grown in the wild, it is highly unlikely they will migrate. Studies show they go no further than five miles from where they were released. Though your released birds may fly away, the Mallard’s ability to fly and escape predators makes them much more likely to survive than any domestic ducks released into ponds and streams. If, however, you do not want your Mallards to fly, you can trim their wing feathers as show in our feather trimming blog post.

Mallards are beautiful birds. Enjoy them in your pen, barnyard, garden or pond.