We grow more than ducklings at Metzer Farms. We grow families.

Many companies boast that they have a family-friendly atmosphere, but few can back it up with proof of their commitment to families like Metzer Farms can. According to the hatchery’s owner, John Metzer, the hatchery has played matchmaker to several couples, three of whom have gotten married. In addition, there have been numerous father-son teams working together at the hatchery.

Take Guillermo, for example. A long-line employee of Metzer Farms and a valuable asset to the hatchery, Guillermo met his lovely bride, Elsa, while they were both employed at the hatchery. The couple wed in 2002 and Guillermo gained a stepson, Jesse. Fast forward a number of years and we find Jesse, Guillermo and Elsa’s oldest son, also working at Metzer Farm alongside his stepfather. As fate would have it, Jesse’s path mirrored his parent’s, for as an employee at the hatchery, Jesse too met the woman who would become his wife, Monica. In addition, Guillermo’s other son, Gabriel, also worked at the hatchery during one busy springtime rush. If you are keeping track, that is five members of the same family that have all worked at Metzer Farms. And it could be argued that this family wouldn’t even be a family had Guillermo and Elsa not locked eyes over a batch of freshy-hatched ducklings.

Believe it or not, Guillermo and Elsa were not the first married couple for whom the hatchery played matchmaker. As John explained, when his father, Olin, started the hatchery back in 1972, he built his staff slowly. The second employee he brought on board was Carmen. Carmen caught the eye of a later employee, Rogelio, who was hired on seasonally. In 1996, Carmen and Rogelio became the first Metzer employee wedding, setting the stage for more to come.

As we saw with Guillermo’s story, many employees of Metzer Farms have had such positive experiences that they advocate for their own children to apply to work at the hatchery. As John explained, it typically starts as seasonal work. In the springtime, the hatchery is particularly busy hatching ducklings and filling orders. A temporary workforce is brought in to help with the rush. This provided an opportunity for many of the permanent workers to suggest the company hire their children. In many cases, employees who began as temporary seasonal workers stayed on after the Spring rush to become permanent employees and found themselves working alongside their own parents.

Naturally, having family members working together sets the stage for some shenanigans. Guillermo recalls one time when he was showing Ruben how to use a winch to lower feed pans all at once. His stepson, Jesse crept in unbeknownst to them. From behind, Guillermo and Ruben heard Jesse yell that the winch cable had snapped. The two men dove to the ground, cowering in the duck bedding while Jesse had a good laugh at his own prank.

Another time, it was the father’s turn to prank his son. Guillermo caught a mudhen, also called a coot, in the back ditch. Guillermo’s younger son, Gabriel, came over to his dad, asking what the strange looking bird was. Guillermo sat the coot next to his son and the bird promptly bit him on the arm. Startled, Gabriel exclaimed that he never wanted to get that close to the strange chicken ever again!

If working alongside family members results in pranks and tricks, there is a different experience having one’s love interest as a co-worker. Jesse met his future wife, Monica, when they were both working at Metzer Farms. One time, Guillermo saw Jesse give Monica a kiss at work. Guillermo pulled Jesse aside and told him that John had witnessed their fraternizing. Jesse was so distraught that he spent the whole day waiting to be fired. It was much later that he learned that John had not seen him kiss Monica after all. 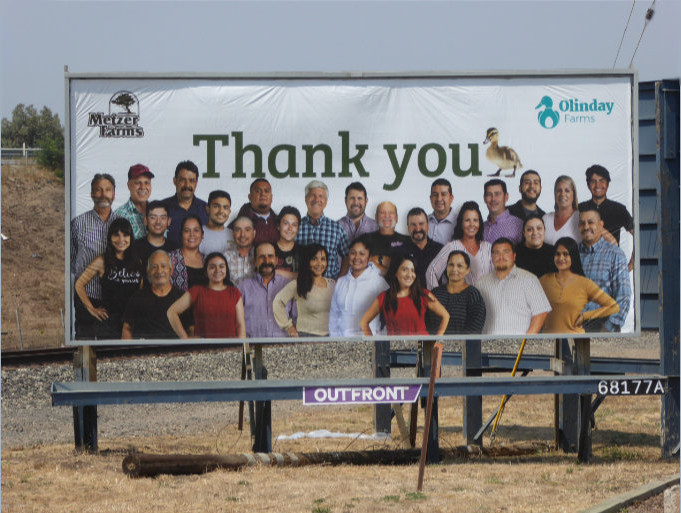 John explained that at one point in time there were five father-son teams employed at Metzer Farms, in addition to others who have come and gone. They included Guillermo and Jesse, as well as Juan Carlos and his son Carlos, Lito and his son Patrick, Mauricio and his son Caesar, Sergio and his son Sergio Jr, and Mark and his son Isaiah. Some of them continue to work at Metzer Farm to this day, including Guillermo, Mauricio, and of course, John and Marc Metzer.

Metzer Farms is under the leadership of a father-son team of John and Marc Metzer with Marc being a third-generation duck farmer. John’s father started selling ducklings and eggs in the early 1970s, and John turned it into a business when he graduated college in 1978. Then, after his son, Marc graduated from Cal Poly State University, taught in Korea, and worked in the California fresh produce industry for a few years, he joined the family business in 2012 as the General Manager of Metzer Farms.

In the nearly five decades that Metzer Farms has been in business, the hatchery has played an important role in the lives of its employees. For some of them, that role included that of matchmaker. For others, it was an opportunity to strengthen family bonds. When Metzer Farms calls itself a family focused business, it is because they have multiple generations of employees … and a few wedding photos … to prove it.