No Ducks Allowed in Hawaii???

Wednesday, October 13, 2010
Hawaii has only one native wild duck, the Koloa and it looks much like the North American Mallard duck. In an effort to preserve the purity of the Koloa (it is listed as endangered), the Hawaii Division of Forestry and Wildlife and the US Fish and Wildlife Service does not allow any ducks (domestic or wild - eggs, ducklings or adults) to be imported into Hawaii. No Pekins, no Runners, no Swedish, no White Crested. No ducks. In my opinion there is no risk of these breeds crossing with the Koloa, but as they all originate from the wild Mallard, they are banned. 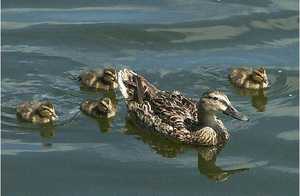 The interesting problem this creates is that domestic ducks are used in Hawaii to control the Golden Apple snail in their native Taro fields. Taro is the most culturally significant agricultural crop in Hawaii. It is a root crop that is grown in flooded fields – a perfect environment for snails. If the snails are not controlled, the crop is severely damaged. But we all know how much ducks love snails – and they are very effective in the taro fields. However, due to their inability to import ducks, the farmers are losing their battle with the snail and production has dropped drastically. The Golden Apple snail is not even native to Hawaii, it was introduced in the 1960's as an algae cleaner in home aquariums and then escaped into the fresh waters of Hawaii.

In 2005 I was invited to speak at a round table conference in Honolulu on the best management practices for the use of ducks as Golden Apple snail control. Taro farmers and members of wildlife government agencies sat down to discuss the problem. Unfortunately nothing substantive came of the meeting and the state and national wildlife officials have refused support of ducks for control of the Golden Apple snail. At the same time they refuse to deal with the snails as an invasive species. Other methods of snail control (copper sulfate, papaya extracts, neem extracts, ferric phosphate, hand removal) have been attempted in Hawaii but with little success. Currently the farmers are trying an organic soap to use in conjunction with ducks to control the snails. 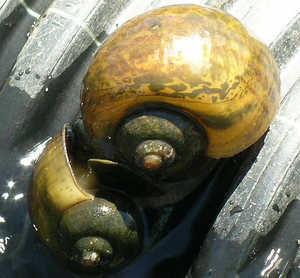 A Snail Control Plan has been written and their recommendations might be of benefit to anyone using ducks to control snails in gardens or orchards:

Pekins are the preferred breed in Hawaii due to its larger size (less chance of breeding with the Koloa), easy visibility (all white), inability to fly, large appetite for snails and easy nature.
Females are less aggressive, and more focused, steady snail eaters than males.
Muscovy and Runners seem more destructive of the banks of the taro field and the taro plant itself.
Juvenile ducks will eat more snails than mature ducks.
Monitor the amount of time they spend hunting for snails. It may only take a couple hours a day to control the snails. Have a pen in which they can be put when not hunting for snails to protect the vegetation and to protect the ducks from dogs and predators.
If you do have predator problems, release the ducks when you are in the area – even if it is only for half an hour twice a day.

It is not illegal to use ducks for snail control. It is just illegal to import ducks into Hawaii. If someone in Hawaii started their own little duck hatchery, using the ducks already there as breeders, it could probably supply Taro farmers throughout Hawaii. Unfortunately that has not yet happened.

For more information on what poultry are allowed in Hawaii, you can go to the Shipping to Hawaii page on our website. On that page we have a link to Hawaii's complete Apple Snail Control Plan which includes specific directions for the use of ducks for snail control. Please note that we can ship geese, turkeys, keets and pheasant chicks to Hawaii but a special import permit is required - which we can obtain for you. This is also explained on the Shipping to Hawaii page. If you are interested in our ducks for your own snail control needs, start with our Duck Breed Comparison page.