Wednesday, August 11, 2010
Last week we went through our Rouen, Cayuga, White Crested and Fawn and White Runner breeder flocks. Each female was picked up and the distance between her pelvic bones was estimated. This technique was shown in our last blog: Determining Which of Your Ducks Is Laying. I want to share the results with you. 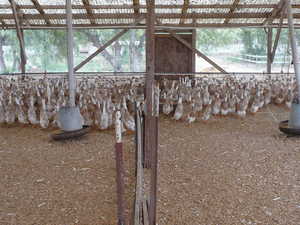 So by checking each female, we removed 57% of our feed bill and only lost 5% of our eggs! As there are now fewer females in the pen, we will also use less shavings. Of course we were able to remove some of the males, too. As far as we know, there is no way to visually determine the fertility of a male but you can cull out any males that are less thrifty than the others, have bad legs or appear to have been picked on by other birds.

The results for the other flocks was just as impressive:

Of all the breeds, the Mallards were the easiest to differentiate layers from non-layers. As you can see, over half the females were removed and there were no eggs in the cull flock pen the next morning.

The picture shows the keep and cull flocks of Fawn and White Runners. As you can see, there is very little difference in appearance in the two flocks. You have to pick up each bird and check it. It is basically a comparison with other birds of the same breed so if you have never done it before, check 10-15 birds and note the difference among them. Then start over and remove those birds in which their pelvic bones are stiffer and closer together than the others.

In our next blog we will be addressing how to use the feed formulation program on our website. http://www.metzerfarms.com/FeedConversion.cfm. Many times you cannot find feed with the correct level of protein. This program will show you how much to mix of two different feeds to achieve the protein (or other nutrient) level you want to achieve.

Thank you! Enjoy your ducks and geese!