Friday, March 2, 2018
The word ‘runt’ has a lot of negative connotation to it. Runts are thought of as weak and sickly. I’m here to tell you that this is not true! The official Google definition of a runt is “an animal that is smaller than average”. A runt is just a smaller version of the same breed. That doesn’t mean it is sick or weak, just small.

What causes this? Our veterinarian’s theory is that it has to do with the flora in the gut. Everyone has bacteria in their stomach, both good and bad. The good bacteria colonizes in the stomach and helps with digestion. Runts, however, do not seem to have as much good bacteria or it has the wrong kind of bacteria colonizing in its gut. This means that it doesn’t digest its food as well and therefore does not grow as fast as its siblings. 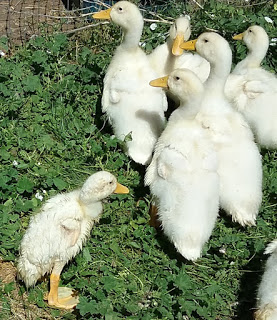 There is a way to fix this. By providing the correct probiotics, runts are capable of catching up in growth with the rest of the flock. You can find probiotic supplement packs at your local feed store or Amazon. The probiotics help to develop the good bacteria in the bird’s gut that will help with digestion and facilitate growth. You can mix this in the communal feed as the extra probiotics may benefit your other birds, too.

Other potential causes include hatching from small eggs, viral infection, genetics, coccidiosis, and bacterial infection during incubation. While these are valid causes, our veterinarian believes they cause far fewer runts than improper bacteria in the gut.

The main question is what this means for you. If you are a commercial producer, we suggest culling the runts if only because their growth rate will be off of your expected processing date. For example, Pekin are ready for processing at 7 weeks, but your runt may not catch up until about week 12.

The following picture is from one of our customers, a Hutterite colony in Montana in 2014. They and other colonies order Pekin ducklings by the thousands and you can clearly see in the photo that there were several ducklings that were not growing as fast as the others. They were 4 weeks and 4 days of age for the picture. When it came time for processing at 12 weeks, however, they could not tell which had been the runts! 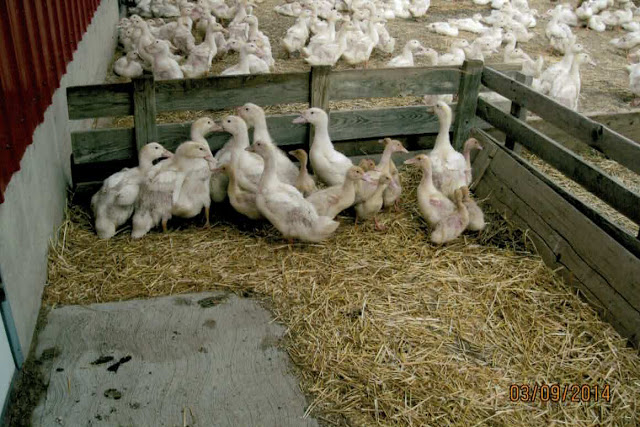 If your main concern is egg production, a runt’s egg production start will probably be delayed. If the runt is treated, however, and catches up in growth, they should be on time to start laying with the rest of the flock.

Both the meat and eggs are still good to eat. Remember, a runt is simply smaller.

Whether your birds are pets or not, make sure you keep them all fed, watered, and warm. It will take time for them to catch up in growth, but it will be worth it in the end.