Can Medicated Feed Be Used for Waterfowl?

Wednesday, November 30, 2011
Can medicated feed be given to ducks and geese? Many people say No. I will explain why I feel the answer is Yes.

First of all, there are four drugs (medicines) that are approved by the USDA for the use in ducks. These have been used successfully for years to control a variety of waterfowl diseases. They are Chlorotetracycline, Neomycin, Novobiocin and Rofenaid.

The bigger concern, however, is sacked feed sold at your local feed store. Some of these sacked feeds (especially starter feeds) have medications in them to control coccidiosis. Coccidiosis is an internal protozoa parasite that can harm chickens, turkeys, game birds and occasionally waterfowl. As coccidiosis is a common problem, and most people have chickens, the feed manufacturers will often include medication in starter feed to better control this disease. But what about waterfowl? Will it harm them? 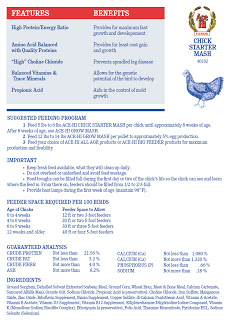 We have contacted all the feed mills that we could find that make sacked poultry feed in the US. From material they have sent us or from their website, we have learned that these 29 mills make 59 different starter feeds for chickens, waterfowl and game birds. Of these 59 starter feeds, 19 have a medication in them to control coccidiosis.

Four drugs are used. Fifteen of the feeds contain Amprolium, 1 has Monensin, 1 has Lasolocid and 1 has BMD (Bacitracin methylene disalicylate). 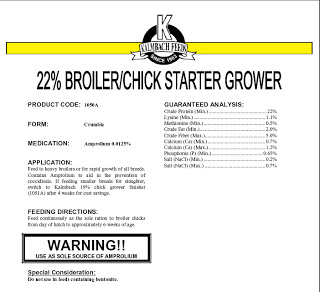 To investigate this further, I asked for the assistance of Dr. Larry McDougal of the University of Georgia and Dr. Alison Martin of the Livestock Conservancy. Both of these individuals have done extensive work with coccidiosis. They found research that had been done here in the United States and abroad on the effect of these four drugs on waterfowl. As Dr. McDougal said “Not one of these papers described any harmful effects to waterfowl except where the normal dosage was significantly overdosed.” 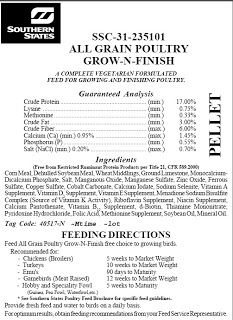 Many of you have heard of Dave Holderread, of Holderread’s Waterfowl Farm in Oregon. Dave is an expert on waterfowl and an ultimate waterfowl breeder. He conducted research on coccidiostats with Oregon State University in 1982 (1). His paper states “Frequently publications pertaining to waterfowl state that medicated feeds should not be fed to ducklings and goslings. In some localities, producers and hobbyists who raise a small number of ducklings and goslings can only purchase medicated chick, turkey or game bird starter and grower feeds. Because of the lack of documented information on this subject and the numerous requests for advice on this matter, anticoccidial drugs zoalene, sulfaquinoxaline and amprolium were mixed in mash feed and fed to ducks up to four weeks of age.”

His conclusion was “From this experiment, it appears that sulfaquinoxaline, zoalene, or amprolium at the manufacturers' use levels for chickens and turkeys did not cause mortality, stunted growth or cripples when fed to Khaki Campbell ducklings to 4 weeks of age."

Therefore, it appears research shows these drugs do not harm waterfowl if used at the rates commonly used with chickens and turkeys. 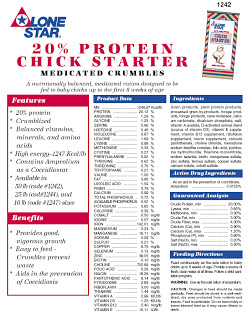 Have there been coccidiostats used in the past that were harmful to waterfowl? Probably and that is why the myth began. But those drugs are no longer allowed or no longer used in the United States.

What if you have the choice of medicated or non-medicated starter feed of equal nutritional value? My recommendation would be to use the non-medicated feed. There is no point in feeding medication when it is not needed.