Saturday, January 15, 2011
I was given an opportunity the other day that I couldn't pass up.

Most people are familiar with Roman Tufted geese, a smaller white goose with a tuft of feathers on their head. But more common in Europe is the Plain Headed Roman goose – without the tuft. These geese are one of the oldest breeds of domestic geese. Their origin is disputed but their claim to fame was the saving of Rome from the Gauls. The story is the squawking of their Roman geese awakened the soldiers to the advancing Gauls and preserved the city of Rome. 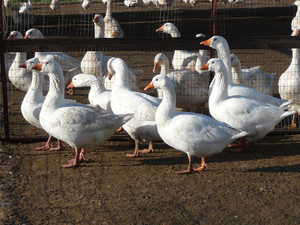 Roman geese are some of the smaller domestic geese, with males typically weighing about 12 pounds and females about 10 pounds. Records indicate they were a fairly prolific goose (50-65 eggs per season) but with dwindling numbers and breeding for show qualities only, the breed has lost some of its productivity.

Being smaller, though, they are an active breed that will do well in small pens and in large pastures. I can visualize the beauty of a flock of these smaller, white geese strewn across a green pasture. Being smaller, they will eat less, can tolerate less space and will leave less manure behind. The 1982 Standard describes them as "active, alert, docile rather than defiant." For a comparison of other goose breeds you can go to our comparison chart on our website. 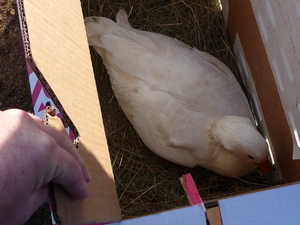 Patiently waiting in the box.

Dave Holderread imported a small flock of these Plain Headed Roman geese from Canada in 1995. In his effort to simplify his breeding program, he sold his last breeders to Dana McGuire two years ago. Dana realized she could not keep her geese and offered them to me two weeks ago. Arrangements were made and she mailed them to me last Wednesday by Express Mail and they arrived Friday morning in wonderful shape.

As you may know, geese are very curious, intelligent birds. We built the pen for our new geese inside a larger Embden pen and immediately the Embden came over to see who their new neighbors were. Hopefully they were being welcomed to Metzer Farms. However, I was told a fight did break out through a common fence and the Roman made a much larger Embden gander take off in retreat. The Roman was probably a little cranky after its long journey. 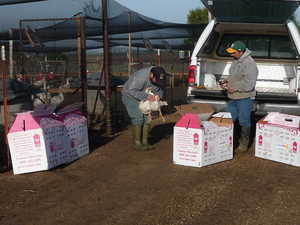 What could be a worse name than Plain Headed Roman? Dana also thought it was a poor name and decided to rename them Classic Romans. I think this is a great name, with implications of their classic Roman ancestry. Unless you can come up with a better name, their name is now Classic Roman geese.

We will not be selling any Classic Roman geese this year as we want to expand our small flock (five males and four females) so hopefully we can offer them in 2012. In addition, I will be mating three of the males to some White Chinese geese. I want to test the resulting crossbred birds as a smaller, high quality meat bird. 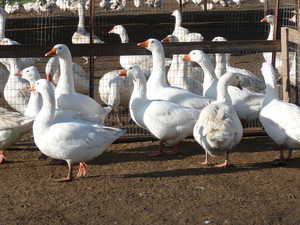 So let us see how Dimitri, Celestine, Bonnie, Barnabie, Ferdinand, Phoenix, Obidiah, Abigale and Elanor do on our farm. I will keep you posted.