Sunday, March 13, 2011
Clipping the wings of your birds is really very simple. Some things to keep in mind:

1) Clip only one wing. This keeps them off balance when they try to fly.
2) Leave 3-4 of the large flight feathers at the tip of the wing. By leaving these feathers, the wing looks more normally when it is folded against the body.
3) Use heavy scissors or tin snips.
4) Clip within 1-2 inches of the skin. 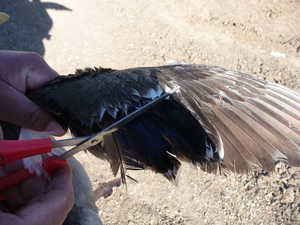 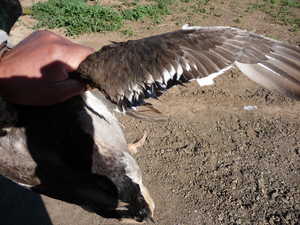 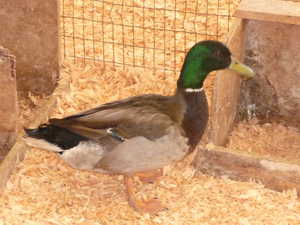 Right wing has been clipped on this male mallard duck. 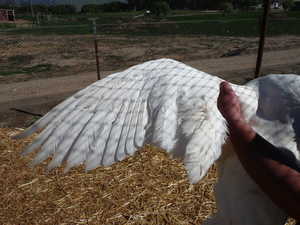 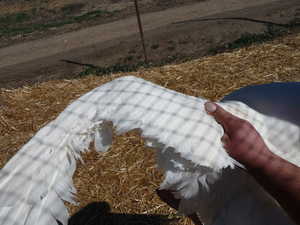 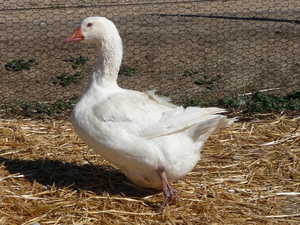 By leaving a few feathers at the tip of the wing, it appears more normal.

The left wing was clipped on this Embden goose.

Keep in mind that ducks and geese go through several sets of feathers as they mature. For ducks, wait until they are at least 15 weeks of age and geese 17 weeks of age before you clip the feathers. At that point they will have their final set of feathers.

Feather clipping needs to be done annually. Depending on your location, adult waterfowl molt and grow a new set of feathers in the summer or fall. When you start seeing feathers on the ground from their molting, keep a careful watch. You don't want them to fully develop their feathers and discover they can again fly before you clip the wings!

The only ducks we have that fly easily are the Mallards. I have read of all breeds of geese flying except the Super African, Large Dewlap Toulouse and Sebastopol. Of course the Canada are very capable of flight.