Thursday, December 9, 2010
Research was conducted in England on the best way to provide cleansing water for ducks being grown for meat production. There is no legal requirement for providing this water but the Council of Europe has recommended that ducks be able to dip their head in water and spread water over their feathers.

The research was done by Dr. Tracey Jones, Dr. Marian Dawkins and Dr. Corri Waitt of Oxford College. They had two objectives:

1) Did birds prefer one water source over another?
2) Did birds grown only on nipple waterers “miss” water bathing activities? 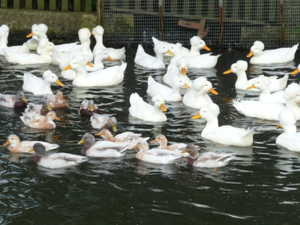 Methods
Birds were provided water by one of the following:
1) baths for swimming (37”x 26”x 10” deep)
2) troughs for head cleaning and splashing (37”x 5”x 3” deep)
3) showers (4 irrigation sprinklers per pen)
4) nipple waterers
5) nipple waterers for the first 35 days and then troughs
6) baths, troughs, showers and nipples all in the same pen

All the Pekin ducklings were initially grown together and then at 24 days were placed in the research pens. Each pen was about 10'x12' and contained four ducks. The baths and troughs were emptied and cleaned once a day. The sprinklers ran 24 hours per day, high pressure during the day and low pressure at night. The upper part of the pen was bedded with straw and fresh straw was added daily. The water was provided at the lower portion of the pen. Spilled and dumped water drained out of the pen. 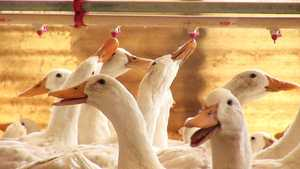 Ducks were visually inspected at the end of each week and scored for the condition of their eyes, nostrils, feathers, posture and walking ability. Body weight was measured at 24, 36 and 53 days of age. Behavior was recorded once a week for 10-12 hours and broken down into different activities such as bathing, swimming, walking, dabbling, preening, etc.

Results
At six weeks of age, the only ducks that had crusty eyes or nostrils were the nipple ducks. These same nipple ducks also had the lowest feather scores with only 17% having clean, smooth feathers. Trough ducks were intermediate with 67%. The shower and bath ducks scored 95% and the ducks that started with nipples and finished with troughs scored 92%. All ducks, except the nipple ducks, were well oiled (seen as a yellow tint to the feathers and a waxy coating on the feathers). There was no effect of treatment on posture, walking ability, body weight or growth rate. 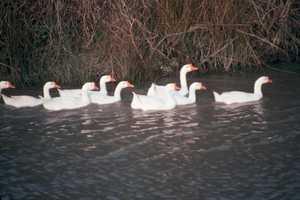 Only about 5% of the time were the birds bathing, indicating that they may not need access to bathing water all the time. The results also showed that, when given a choice, ducks preferred nipples least as a source of water. If ducks were given all four sources of water, their first choice was showers as they spent more time resting and dabbling from them.

Comments
Very few commercial farms have any type of open water available for growing or breeding ducks. The main disadvantage of open waters is 1) larger bodies of water, such as ponds, can quickly become contaminated with Campylobacter and other organisms that can harm duck and human health and 2) it is difficult to dispose of this water as it cannot be allowed to run into other bodies or streams of water that run off the farm. Larger farms would have to make their own sewage plant to handle the runoff water from spillage and daily dumping of the baths or troughs. But for those growers that want to maximize the welfare of their birds, this research will benefit their planning.