Saturday, May 4, 2019
Geese can make great adoptive parents for orphaned goslings or ducklings. While we have no scientific backup for this statement, customers and friends have had great success with introducing baby birds to their geese for adoption. There are a few elements that each of the stories have that might have contributed.

A customer of ours wrote us with her goose story. Her two female Pilgrim geese were trying to hatch eggs, but were having no luck. Wanting to give them something to care for, she found some ducklings at her local feed store and brought them home to her geese. The two took to the ducklings immediately. In this instance the mother geese were broody and their instincts were primed for taking care of babies.

Another person who wrote us had inherited a pair of geese with their property. They also brought in some ducklings. To their surprise, it was the male goose that took to them. He struggled to get to the ducklings until the family released them into the same pen. Once he was united with them, he started taking care of them as if they were his own. It is not uncommon for males to care for baby birds and are in fact programmed to help the mother in raising their offspring. In this case he was more excited than the female about the prospect of taking care of young ones and he took the initiative in the adoption. 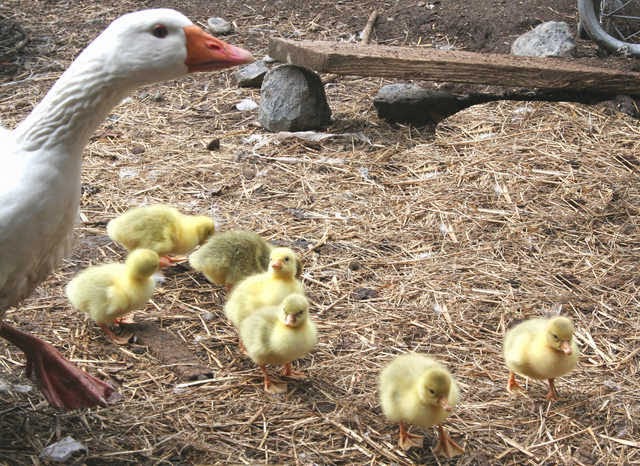 Wild geese have been known to adopt as well. The Huffington Post once covered such an event. An expecting mother goose’s nest burned and she lost her eggs. A month later she adopted some abandoned goslings that someone had found in their pool. To read the full story, click here.

Of course, ducklings and goslings are not the only babies geese have been known to adopt. Another couple that wrote us talked about how their pair of Brown Chinese geese adopted an orphaned group of baby squirrels!

Geese will adopt older birds, too. They do not have to be day-old birds. An adoptive goose would probably take goslings up to four weeks of age!

It is highly unlikely that ducks will adopt, the only success stories we have heard were of geese doing the adopting.

If you do decide to introduce babies to your goose, we suggest going through an introductory process. The safest would be to have a fence between the babies and adults and see what happens. If the adult geese are good candidates, they will come to the fence and call to the ducklings or goslings on the other side. At that point you can put the one or two geese in with the babies and observe them. If there is no aggression by an adult, then you probably have a new family. If there is aggression, remove that goose and see if there are any others that have an interest in the babies.

Keep in mind that while these stories were all successful, not all attempts of encouraging an adoption are. It depends entirely on the goose involved. It helps to have them in the right frame of mind such as those that are already sitting on eggs, but it is not a definitive way to determine if a goose will adopt or not. Adoptions have occurred when the adults were not broody at all.

Adoptions can be very rewarding for you and your birds. The adults can raise those babies they always wanted, the babies are being raised by the best means available and you have much less work if your goose adopts the babies! Just pray your goose doesn’t adopt a baby skunk!