How Do I Know Which of My Ducks Are Laying Eggs?

Thursday, August 5, 2010
There are several ways to determine which of your ducks are laying eggs. No one indication is proof positive but collectively they can give you a good indication of which birds are laying eggs. During the middle of every summer, we use these criteria in our duck breeder flocks to remove nonlaying birds. If, for example, we can go through a breeder flock of 500 Rouen ducks, remove half the birds but only drop the egg production a little bit (due to the inadvertent culling of laying birds), we are much better off. We have just cut our feed, water and bedding bill in half with barely any loss in egg production! 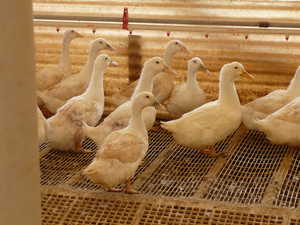 In this group of Pekins, the female on the right is probably not laying. Notice her bill and feet are darker orange and her feathers are bright and clean which means she has recently molted. The female in the front left is probably laying well. She has all her feathers but they are dirty, original feathers meaning she has not molted. The female in the left back is missing her flight feathers which means she is now going through a molt and probably not laying. 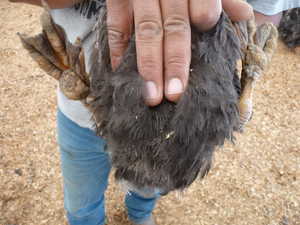 The pelvic bones are only two fingers apart in this female Rouen - she is not laying.

The pelvic bones are four fingers apart in this female. She is definitely laying!

On our next blog we will give you the results of our first cull. How efficient were they in removing the non-layers? What was our egg production before and after the cull?