How Do We Know Pekins Originate from Wild Mallards?

Thursday, July 21, 2011
We have read that all domestic ducks (with the exception of Muscovy) originate from wild Mallards. But how do we know that?

Charles Darwin wrote in 1883 that the middle four tail feathers curl upward in the males of only one breed of wild duck, the Mallard (Anas platyrhynchos). This characteristic of a curly feather on the male is in all domestic ducks. He felt, therefore, there was little doubt that the wild Mallard was the parent of all breeds of domestic duck. 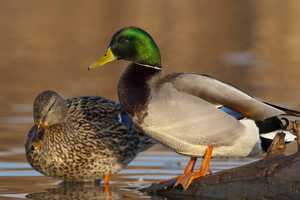 Notice the black, curly feather on the male's tail.

Are there similarities in growth, maturation and body composition between Mallards and domestic ducks? Yes.

The maturation rate of Mallards and domestic ducks is very similar. Both can lay their first eggs at about 20 weeks of age.
In commercial breeder operations the ratio of males to females is also very similar - about five females to every male to maintain peak fertility.
Both Mallards and domestic ducks achieve mature body weight by about 12 weeks of age when both their primary and secondary wing feathers are mature. 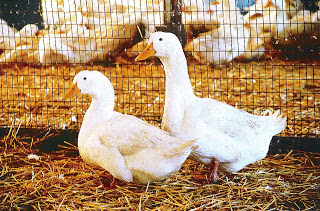 Note the white, curly feather on the male Pekin duck.

In the wild, a female Mallard does not actively feed her ducklings and she may travel great distances to find feed. The ducklings must feed themselves and keep up. Therefore, thigh and leg muscle and bone, along with webbed feet, must develop rapidly to not only travel looking for food but to swim and escape predators. Mallards and Pekins are very similar as theynormally achieve 80% of the mature weight and length of leg bones and muscle by 28 days of age! They need these legs early!

On the other hand, breast meat weight, as a percentage of adult weight, is less than 20% by 28 days! This is not surprising as Mallards don't have mature feathers until they are 12 weeks of age so there is no rush to get a large breast for flying until then. Pekins are also slow in breast meat development. 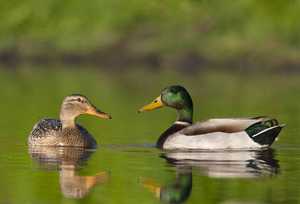 If you think of all the variety of domestic ducks, from the large Pekin to the slim, upright Runner, it is astounding that they all originate from the wild Mallard. A great deal of genetic work has occurred over the hundreds of years to achieve such a wide variety of colors, shapes and sizes. 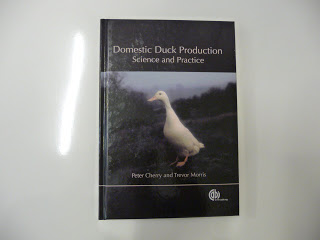 Much of this information came from an excellent book I just received, Domestic Duck Production - Science and Practice. I have ordered ten copies from the publisher in England and will blog its availability once it arrives. It is written for the commercial egg and meat producer but has fascinating background information on ducks, too.