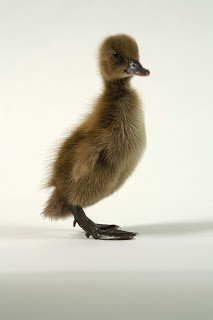 The Khaki Campbell was first bred in the late 1800s by Adele Campbell in Gloucestershire, England. She had crossed her Fawn and White Indian Runners with Rouens in order to make a breed with exceptional egg laying abilities with larger bodies. Wanting the then popular buff color, she tried to breed her original Campbells with Penciled Runners. She did not get the buff color she wanted, but the color she got was similar to the khaki color used in British army uniforms so the ducks became Khaki Campbells.

The newly dubbed Khaki Campbell was introduced to the public in 1898 and made its way to the United States in 1929 thanks in part to Perry Fish of Syracuse, New York. They became a part of the American Standard of Perfection in 1941, despite the fact their numbers had languished for several years. This changed in the 1970’s when the Khaki Campbell population increased due to social movements to return to the land and duck egg demand increased due to Vietnamese immigrants after the Vietnam War. 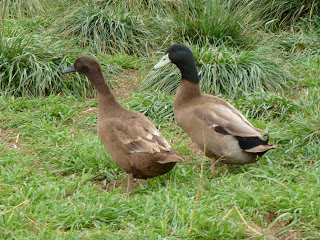 The Khaki Campbell is a light weight bird, around 3½ to 4½ pounds, and a very prolific layer. In 1920 Aalt Jansen from the Netherlands started breeding Khaki Campbell imported from England. With careful breeding and testing, Jansen was able to produce a strain that averaged 335 to 340 eggs per duck per laying year. With a flock of 50,000 that is 16.75 million eggs per year which was extraordinary at the time. The Jansen flock was eventually picked up by the Kortlang family in England. John Metzer has visited the Kortlang farm and our own Khaki Campbells have some Kortlang blood in them.