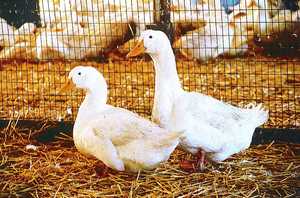 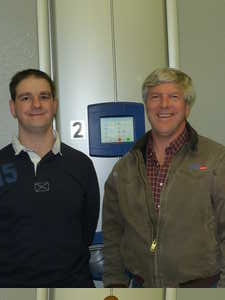 I was visited recently by Laurent Bomard, Grimaud's Western Hemisphere representative
(on the left in the picture). 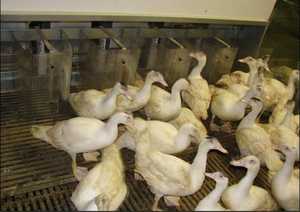 Muscovy ducks and individual feeding stations behind them.

Grimaud has developed equipment to measure the feed conversion of each individual duck in a flock. With this information, they can select the better converting ducks for breeding stock. Each duck has a chip implanted in its neck (much the same as is done with horses and dogs for identification purposes). Each feeder can only be used by one duck at a time. When the duck reaches for feed, the scale automatically weighs the feed. When the duck leaves, the scale again weighs the feed and records the difference as feed eaten by that particular duck. The advantage of this system is each duck does not need to be penned separately to record the feed consumption – they can be grown in a flock. 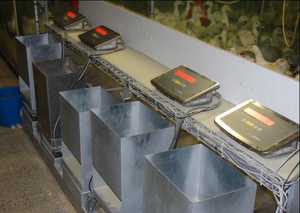 The back side of the feed hoppers. Notice the Muscovy on the other side of the short wall.

Grimaud started with Muscovy ducks and became the world's leader in Muscovy breeding (France consumes much more Muscovy than Pekin duck meat). They then turned to Pekins, rabbits, pigeons, geese and guineas. Our French Toulouse geese are of Grimaud breeding as are our Pearl Guineas.

Is anyone doing any selection on their ducks or geese for characterisitics other than size or appearance?