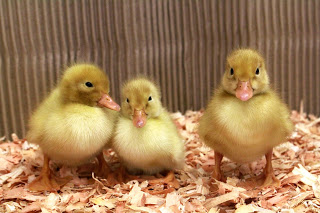 The Pekin duck has a long history with records in China going as far back as the 1300s. It was introduced to Great Britain in 1872 and then the United State in 1873. It has since taken over the US market as the go-to commercial meat duck.

The Pekin was bred for its meat, but can be considered a very good egg layer, too. Averaging 8 to 12 pounds in weight, it can lay 150 to 200 eggs per year, making it a great multi-purpose duck.

They are typically processed at six to seven weeks of age with its breast filet being about 21% of the carcass. As such, it has become a very popular commercial duck with a fast growth time and excellent feed conversion (only 2.4 pounds of feed per pound of live body weight gain). In culinary circles, it is the main ingredient for roasted Peking duck. 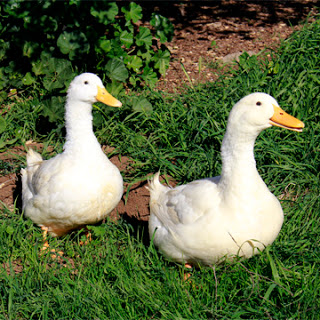 The dinner table is not the only place the Pekin has become famous. The Aflac duck is a Pekin which originally came from our farm and the was also the inspiration behind Donald Duck.

The Grimaud Hybrid is named as such because we purchase day-old breeders from Frimaud Freres in France every four months. It is called a hybrid since the Grimaud Hybrid is produced by crossing two strains of Pekin, one strain bred for high meat production and one strain bred for high egg production. By crossing females from the egg laying strain with the males from the meat production strain, you hatch a lot of ducklings that can be grown for meat.

Outside of the commercial market, advertisement, and entertainment industries, the Pekin is a very popular duck among kids and 4-H groups. It does well as a meat class bird at the county fair and is an amazing addition for any backyard hobbyist.