Friday, November 5, 2010
On March 1st of this year the US Fish and Wildlife Service (USFWS) published a final ruling that included several onerous provisions concerning the keeping of Muscovy ducks. As wild Muscovy are now found in three southern counties of Texas, they are now included in the Migratory Bird Treaty Act and have the same regulations as wild Mallards. Unfortunately the USFWS was unaware of the commercial meat production and hobby breeding of Muscovy ducks. Once they heard from the hobbyists and hatcheries, they realized they had to revisit their rules. On October 1st they published a new set of rules. 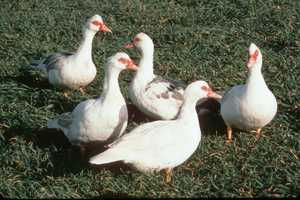 It is interesting to me that because wild Muscovy have moved into three counties in Texas, they are now included in the List of Migratory Birds. And guess what? Muscovy do not migrate! I have nothing against Muscovy and I know they make excellent pets, meat birds and exhibition birds, but they are probably more of an invasive species than a migratory bird!
The part of the current rule that bothers me the most is that “You may not sell or distribute muscovy ducks as pets.” I don't understand how they can rule that you cannot have Muscovy as pets, but you can have Mallards as pets, or innumerable other animals as pets. I have been told by some muscovy owners that their Muscovy are the dearest pets they have ever had. Now this practice is “illegal”? There is no point in making a law that will be flagrantly disregarded. 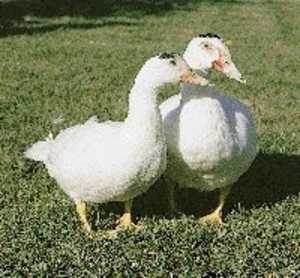 A second provision that concerns me is “You must physically mark all offspring hatched in captivity before they are 6 weeks of age in accordance with section 21.13(b), unless you hold them at a public zoological park or a public, scientific or educational institution.” The USFWS's accepted methods of marking are 1) clip off the back toe on the right foot, 2) pinion one wing, 3) leg band with a seamless band or 4) tattoo the bird. We have the same requirements for domestically hatched Mallard ducks and at Metzer Farms we always clip a back right toe immediately after they are removed from the hatcher to fulfill this requirement. Unfortunately, very few domestically hatched Muscovy will be caught and marked correctly as most are hatched under their mother and it is difficult to catch these day-old Muscovy ducklings right after after hatching. But the pinioning or toe removal needs to be done immediately after hatching to lessen blood loss of the baby ducklings. So my guess is very few people will accomplish this requirement.

I encourage you to read the entire ruling and submit your own comments concerning it. You have until December 30th to submit your comments in the ruling. You must either submit a comment on their website or mail them a letter.

In the big picture, there are two things to consider with this process. The bad: they made an initial ruling without a clue on what was going on with Muscovy in the US. The good: they understood the resulting uproar, listened to the public, revised their rules and are doing a much better job of publicizing their new proposed rules. Now we just need to convince them to make a few more changes. Metzer Farms does not hatch and ship Muscovy ducklings as they do not handle shipping well. Their adrenal system is not as developed as other ducks at hatching so must have water sooner after hatching than your typical Pekin, Khaki Campbell, etc. We experienced much higher mortality with Muscovy and so, for this reason, discontinued selling day-old Muscovy ducklings. We recommend people try to find their Muscovy locally.

Next week we will show you how to use artificial lights to maximize duck egg production during the fall and winter.