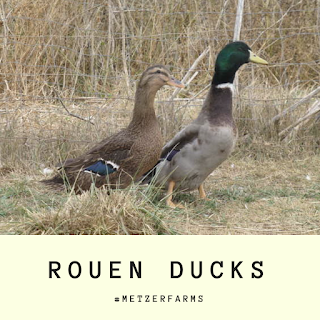 The Rouen has gone by a few contested names. Initially it was named after “Rhone”, an area in France known for its food and wine (though what part of France is not known for its local cuisine!) during the early 1800’s. “Roan” was its name for a while as it referenced the mixing of colored and gray plumage. It’s believed that the name “Rouen” was finally selected by the people of Normandy for the city of Rouen.

The Rouen breed was the national standard for a meat bird until the Pekin was introduced in 1873. The Rouen was then added to the American Poultry Association Standard of Perfection in 1874.

The Standard Rouen is much larger than our Rouens at about 9-10 pounds. They are the only Rouen of the two types that are successfully shown at fairs and competitions. Their bodies are much larger in length and depth to the point they almost drag on the ground. As their keel drags on the ground, they are more difficult to keep clean and they do much less foraging than a utility Rouen.

Our utility Rouens are bought for many purposes. Averaging at 5-7 pounds, they are known to have excellent meat. They are great egg layers at about 140-180 eggs per year. Their fertility is about 89% and they make excellent broody mothers. For those interested, about 35% of females lay bluish eggs.
And if none of that interests you, many people buy them as they make great pets. While their personalities are quite calm, the reason most buy them as pets is due to their vibrant coloring. While the female has a mottled pattern of various browns for her plumage and a dusty orange bill, the male is the showstopper with his gray body, white collar, green head, and yellow bill. Finally, both males and females possess a vibrant blue stripe on their wings.

Do keep in mind that the coloring of the male is dependent on age. The Rouen male will look exactly like the female for roughly the first 12 weeks of life. At week 12, their gray bodies, white collars, chestnut chest, and green heads will slowly start to come in over the course of about 3 weeks.

It is due to their coloring that many can easily mistake Rouens for Mallards. Truly, the only differences between a Mallard and a Rouen are that Rouens are bigger and flightless. For those wanting the aesthetic of a Mallard, but don’t want them to fly or need to trim their wings, a Rouen is the best answer.

One thing the Rouen has over the Mallard, however, is that they are not restricted within the United States. Florida has banned the importation of Mallards as they do not want them breeding with their native black duck. This means that any Floridians looking for a substitute for the Mallard should be quite happy with a Rouen. 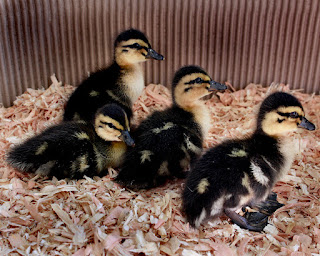