Friday, February 9, 2018
Records of the Swedish duck begin in 1835 in Pomerania which comprised parts of the current Germany and Poland, but was once a part of the Kingdom of Sweden. The Swedish duck was introduced to America in 1884 and became a part of the American Standard of Perfection in 1904.

The Swedish duck was bred for utility, has a calm disposition and ranges in size from 5 to 6 ¼ pounds. It lays a modest amount of eggs at about 150 eggs per year and has great foraging abilities. 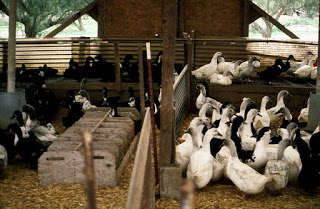 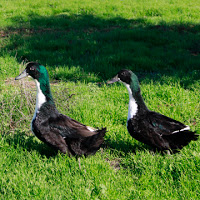 Its most prized attribute, however, is its coloring. Swedish ducks sport a white bib and the last few primary feathers of each wing are white which offsets the darker feathers on the rest of the body. Their bills are a gray color while their legs are a redish brown. Unlike the Swedish duck females, the males’ head feathers grow in a slightly darker color. 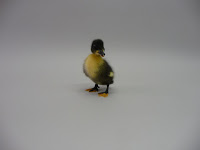 Black Swedish duckling We offer Swedish ducks in the Black and Blue variety. Black is simply black, but the blue is more of a slate gray than an actual blue. When breeding, the Black Swedish breeds true, meaning their progeny will look the same as their parents, while the Blue Swedish do not. If you were to breed a Blue Swedish with a Blue Swedish, on average 50% of the progeny will be blue, 25% will be black, and 25% will be what is called silver or splashed white.

In order to produce 100% Blue colored birds, we have two pens of breeders. One pen has Black Swedish males on Silver females. The other pen has Silver Swedish males on Black females. These pens produce 100% Blue colored ducklings. In June of each year, we switch the males so we have a pen of Silver males on Silver females and a pen of Black males on Black females. We hatch Silver breeders for two weeks that we can use as breeders the next year. After two weeks we then switch the males back to their original pens so we can then hatch 100% Blue Swedish for the remainder of the year. 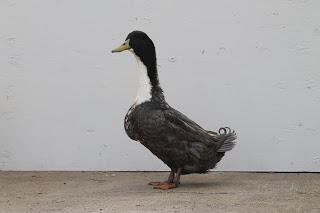 Blue Swedish male Because of the versatility of the Swedish duck, they are excellent additions to your farm or home.